By Eatlean In all blogs, Healthy Eating Blogs

Extra, Extra, read all about us! 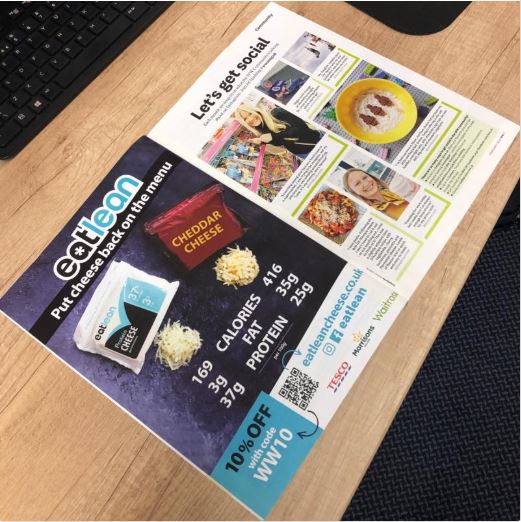 Did you spot us?

Now we don’t usually like to brag…but we are going to! Over the past couple of months, we have managed to get ourselves a few tasty little features in some of the UK’s best-known health and fitness magazines, such as; Weight Watchers, Woman’s Own, and Food To Love.  As well as national press publications, including the Daily Mail!

We are super pumped that so many publishers love Eatlean so much they just have to spread the good word…and a bloomin’ good word they have spread too! So now you don’t have to take our word that Eatlean is the original and best protein cheese, just take a look at what everyone else says.

Our personal favourite bit of press came from the Daily Mail. Who ranked us as the 3rd best low-fat cheese on the market, but the number 1 that is actually made in the same way as standard cheddar!

After our full page comparison shot in WW magazine. Which displayed the unreal macro nutritional benefits Eatlean has over standard cheddar. WW have now included our ever-popular Salmon Spreader in their ‘Three under 3’ feature. Where they describe Spreaders as a ‘SmartPoints saver (that) will help keep you on track’! Have any of our WW members spotted us?

We also think we might have some new Eatleaners at Woman’s Own! They love our cheese bake and include us in their ‘Food Fight’ feature. Describing our cheese bake as ‘delicious’, and recommending to their readers that they swap out their usual cheese board cheese for our Eatlean Cheese in their next cheesebake. We think we would have to agree that this would be a good little swap!

So Eatleaners…keep your eyes peeled over the next few months. As you might just spot a cheese you know!